Stay in a hotel where Johann Strauss once stayed. And discover how exciting history can be! 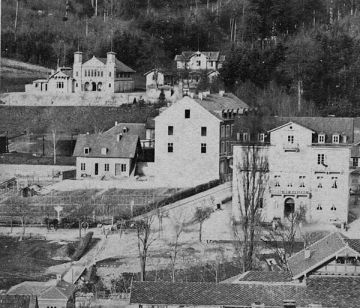 Here in the Bayerischer Hof you will be able to sense the history of the hotel back to the nineteenth century.

Our hotel has always been a popular meeting place. Visitors and locals using the old Baden-Baden railway station were always greeted, on arrival and departure, by the familiar sight of the “Bayerischer Hof” on the opposite side of the road.

In 1825, Anselm Görger, a brewer by trade, built a two-storey house with a basement and outbuildings on the main road between Baden-Baden and the hamlet of Scheuern having been granted a licence to brew and serve beer. He could not have anticipated that 20 years later his house would be directly opposite the terminus of the Baden-Baden to Oos branch line.

Besides serving beer and later wine, the Görger family rented guest rooms. In August 1829, they were able to welcome one of their most famous guests, German poet Justinus Kerner and his family.

In 1845, Anselm Görger renamed the premises “Zum Grünen Berg” having finally been granted his full licence. The property was particularly appreciated by locals wishing to quench their thirst in the shady garden or join in with the entertainment offered at weekends.

Following Anselm Görger’s death in 1862, the property was sold to Emil Krieg. He closed the brewery and converted the building into the Bayerischer Hof Hotel. During this time, even the “Waltz King” Johann Strauss resided here for three weeks in one of the hotel’s best rooms. Subsequent owners and tenants who refurbished and expanded the hotel on numerous occasions upheld the good standards of the all-season hotel. Due to its adjoining rooms, the hotel became a favourite meeting place for local clubs and a popular address for family celebrations. 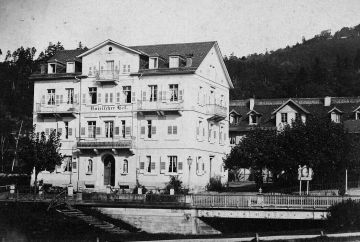 Following the Second World War, the property was one of the first to be allowed to operate again as a hotel and restaurant but the necessary modernisation work was unfortunately not carried out. As a consequence, the hotel’s appeal declined. Only the basement continued to attract reputable clientele from Baden-Baden and its surrounds. From 1964 to 1989, the former beer cellar housed the “Pits Club”, the most renowned night club in Baden-Baden during this period. Known for miles around, it was a prominent nightlife venue for celebrities from radio, TV and world affairs. (Source: Rika Wettstein, Baden-Baden).

In 1994, the Bayerischer Hof was sold to local investors who renovated the building and subsequently reopened it as a hotel.
In 2013, the building’s interior underwent a thorough facelift in order to meet the expectations of the hotel guests of today and tomorrow. The flair of yesterday, however, has not been forgotten and guests will still be able to sense the special energy it emits. Come and experience Baden-Baden with us. It’ll be worth it!

Choose your thank you gift for booking directly with us!

Please note these when booking under “Other”.

Our Special for you 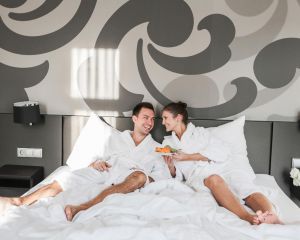